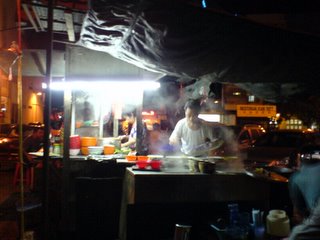 Slow Uncle's wanton mee is one of the best wanton mee in KL. The name Slow Uncle came about because of the length of time you have to wait. Run by three Uncles & Aunty - Slow Uncle, the slow-cook wanton mee wizard, Aunty who makes the tiny fat-filled wantons & sui gows and Super Uncle who takes orders, serves drinks (usually barley & herbal tea) & washes up. They are only opened from 9:30pm onwards until about 2-3am (closed on Mondays). They'd probably be millionaires if they worked faster but perhaps the wait plays a big part in the popularity of this little stall on Jalan Sahabat, behind Radius Hotel. I am not exaggerating when I tell you its at least 30mins from the time you order until you get your piping hot, lard-tossed, springy, delicious wanton mee. And thats if you are reallllllly lucky. Last night, Hunky and I ordered our mee, went around the corner for a beer, came back and waited a further 25 mins before we got our mee. All in all, 1 hour and 15 mins but boy, was it worth it!! Thinly sliced char siu, fatty wanton & crispy deep fried lard, oh and of course, the token sprigs of veg, on a bed of springy, well-seasoned wanton mee. Even the worn out orange melamine bowls they are served in won't deter the hygienely-anal. Need I say more really?
I think I must submit his name into Malaysia's Book of Records under " Slowest Wanton Mee". One day I will ask him for his name but Slow Uncle is pretty apt for now. (p.s/ They also make great curry puffs if you like them crisp and filled with potatoes, 90sen each)