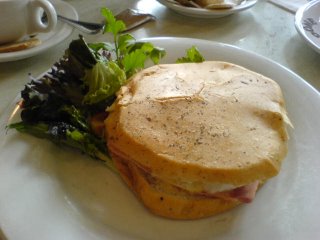 My first time was when I was 18. It happened at a cosy little café on the Little Venice canal, Café Laville. I still remember it like it was just yesterday. Two quivering poached eggs on lightly toasted muffin with slivers of smoked salmon placed on top and hollandaise drizzled over. It was love at first bite. I was in love. Mind you, at £6.90, it was not something I ate all the time. I was a fat art student and could’ve had two duck rice from Four Seasons for the same price. Le Petite Crème in Paddington, Sydney comes a close second. Alexis in Great Eastern Mall is quite good too. They are by far the healthiest tasting ones anyway. I don’t make it a mission to seek out eggs Benedict but I do try to remember the good ones.
Anyway, what promised to be a delightful breakfast with Cuz turned out quite the opposite. Okay, what do you really expect from the restaurants in KLCC right? From sheer lack of choice we ended up in Dome. We decided to share the eggs benedict, you know halve the calories. About 10 minutes later, our breakfast arrived. Cuz and I did a double take and just looked at each other. I told the waitress she gave us the wrong order. After all, I didn’t order the Egg McMuffin (see picture above). Where are the plump poached egg bursting with velvety yolk? Where is the lightly toasted muffin? The spinach? The hollandaise? Instead I get foccacia! Fauxcacia! Well-done eggs, ham, 2 spinach leaves and, can you believe it, cheese! What the hey?! The manager was very nice and replaced our order with the same damn thing but at least the egg was semi-poached this time. We gave up really. We just wanted to eat our $14.95 Egg McMuffin quickly so we could begin our shopping spree. It was truly embarrassing. The funny thing is, the last time I had eggs Benedict at the Lot 10 branch a little more than a year ago, it was done the correct way. What has happened to Dome? Even the biscotti tasted funky. This is what happens when a new CEO joins and decides to cut cost where it counts most. But hey, they are still raking it in so what do they care about two customers?