Sintra must be where the rich have their weekend homes. Located about 20km from Lisbon, Sintra is a scenic town set in hilly landscapes. We were staying at a family-run pensão that was a bargain at €90 for 3 nights. This is off peak price of course. I imagine summer must be quite expensive and really popular because this beautiful house has a pool, games room and massive garden. Perfect for families. We also had a fantastic view of the Moorish castle from the terrace. 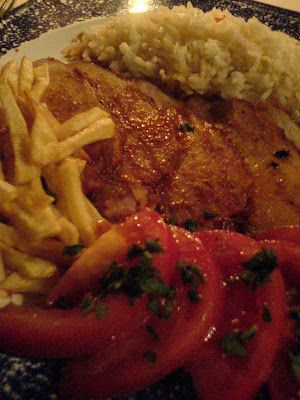 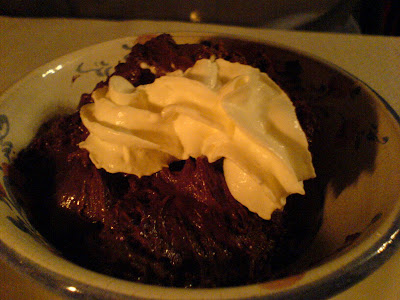 Sintra is a place where it would be handy to have a car. It’s a nice walk during the day but the roads are quite hilly and it gets really dark at night. No light pollution here. Oh and the buses stop running after 7:30pm! On the hotel owner’s recommendation, we Tasca Mourisca for dinner. It was only 10 minutes walk, uphill! It’s a small restaurant that fits not more than 20 people. Its run by a really nice lady who is both cook and owner and she has a young woman helping on the floor. The menu only has a handful of items and changes frequently. For the couvert, they served a super nice dip with melba toasts and fresh bread. The dip is made from tuna and thousand island sauce that she makes herself. It sounds ordinary but it was really yummy! Hunky and I fought over the last spoonful. For my main course I had pan-fried pork chops with rice and salad. Hunky had fish pie which was really a quiche. Both dishes were light and tasty. I was full but he insisted on having dessert so he ordered a chocolate mousse and I had an almond and chocolate torte. Mine was really light and moist with the right amount of sweetness for me. Hunky’s mousse was not very moussey. He had several more during our trip and they were all similar in that they resembled thick custard rather than mousse. It was nice and chocolatey though. 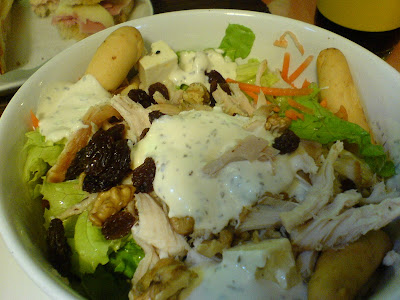 We spent a good 2.5 hours walking around Quinta da Regaleira the next day. It is a lush and magical garden that was built during the very last years of the Portugese monarchy. I just love the names that were given to the sculptures and walkways. “Threshold of the Gods” and “Terrace of the celestial worlds” were my favourite. By this time in the trip, I was desperate for a salad. I’m not sure if it was because I was so hungry by then but it was the best salad that I’ve had in a long time (above)! €5 and I got a big bowl of chopped lettuce, grated carrots, walnuts, goats cheese, poached chicken, raisins and olives. All the flavours came together really well. On our last day, we caught a bus to Mafra to see the palace-convent. The drive there was really interesting because we finally got to see the real countryside. The palace-convent highlight was the Rococo library. It was stunningly beautiful. We were not allowed to take any pictures unfortunately. Our guide also showed us the dead corpse of a bat which lives in the library. Apparently they eat the insects that destroy the books in the library. The bats must be quite fat then because there were thousands of books. We grabbed a quick lunch at a café nearby. I ordered a crème caramel for dessert and it tasted exactly like the on in Ipoh! It was pockmarked and egg-y! It’s the same damn one! 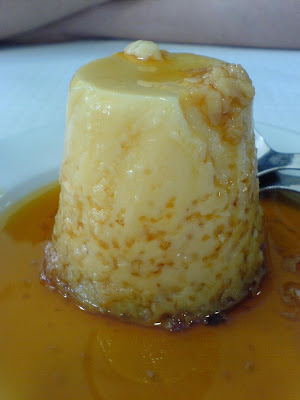