It was a walk down memory lane when we were strolling around Lisbon. Standard 5 sejarah lesson came flooding back and I struggled to remember some of names and events and I could only one come up with Afonso Albuquerque which was also the name of the road that leads to Belém. And of course, Vasco Da Gama, the main man himself. There was a big statue of him riding a horse with exotic creatures by his feet facing the vast unknown ocean before him. We spent a long time sitting there looking up at the statue of the man and I kept thinking that I wished I had paid more attention in sejarah.

Hunky and I set ourselves a budget of €40 a day which included food, transport and admissions to local sights. We managed to stick to the budget on most days because food really is quite cheap. Even after you convert euro to ringgit. Most mains are between €8 to €14 in your average restaurant. In the cafes at lunch, you can get away with a lunch special for about €5. When you sit down at a restaurant they bring you couvert which is usually pão, mentega (yay, I knew this word too!) and olives. Some bring more elaborate things like platters of ham, cheese and boiled prawns. None of these are free. You have to tell them that you don't want them. We had some once and realised we were getting too full for our mains. The servings are large but I don't see that many large people which bring me to conclude that dining out is done in groups. They also like to serve the meats with rice AND chips. Carb overload! Tell me, how to finish by my lonesome? 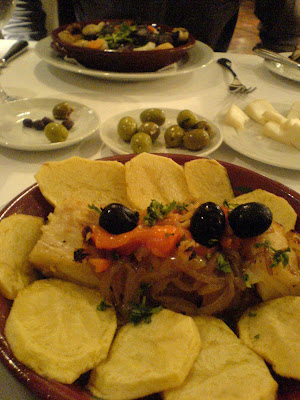 On our first night in Lisbon, we went to a restaurant located on one of the side lanes near our hotel. Sancho is old school dining. It was quaint and charming that all the waiters wore bow ties and wheeled an array of seafood to our table on a trolley. It reminded me of Castell steakhouse, well, without the chocolate velvet booths and cheeseboards as plates. It was that earnest dining room experience that is long gone in KL. Anyway, I had my first of many bacalhau which was baked with potatoes and olives (above). At first, all I could taste was salt. Once I moved past the outer layer of fish, it was very tasty. We were careful not to disturb the sea of olive oil on the bottom of our dishes. Yes, they are very generous with olive oil. Apart from that, it was delicious. Hunky had pork with chestnuts which was also very tasty. 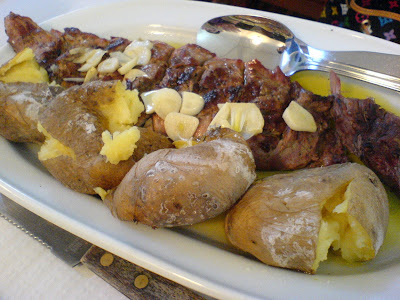 One of our best meals was in the seaside town of Cascais, about 40 minutes by train from Cais du Sodre station. It was a beautiful sunny day after 2 days of grey. We walked around the quiet town and away from all the restaurants dotted along the beaches into the residential area. That was when we found restaurante Apeadeiro. The menu at the window didn't have the usual German, French and English translations so we figured that it must be authentic. It was a busy restaurant with Portugese families tucking into big hearty meals. Our waiter didn't speak much English but pointed out some of the specials we should try. So I ordered the grilled pork tenderloin with baked potatoes (above) and Hunky had the grilled pork ribs (below). I love the simplicity of the dish. The fresh cut of meat is not tainted by any sauce or marinade. It’s plain grilled with some salt and pepper and drizzled liberally with extra virgin olive oil and thin slices of garlic. The olive oil here is superb. It has such an intense aroma. 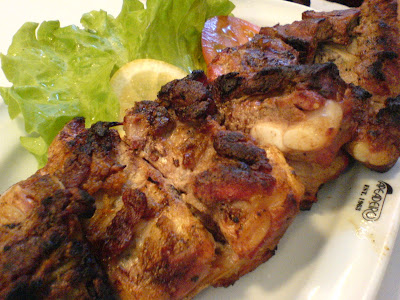 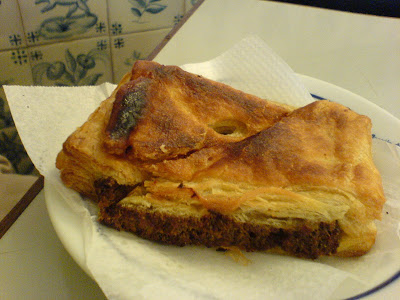 A short tram ride from Lisbon is a place called Belém. There are a few historical monuments, a contemporary looking cultural centre, Mosteiro dos Jeronimos and more importantly, Pasteis de Belém. This was THE place to eat a pasteis de nata except that they are so famous its called a Belém pastry! The place was heaving despite it being almost 3pm and every single table had a plate of them. We were wondering why the waiter looked surprised when we just wanted two. If we knew we were at the famous pastry shop of Belém, we would’ve had half a dozen each. But we didn’t know and we figured there would be more delicious egg tarts to come during our trip. Unfortunately, we never got to taste any that was as good as those. So sad. Pictured above is the puff pastry that reminded me of murtabak I mentioned in my previous blog. It was so tasty! The pastry was so flakey and not oily. How did they do it? When we got back into Lisbon, I tried a “vanilla turd” as Hunky called it. I think it translates to egg croquette (below). It’s an intensely sweet ball of…I don’t know what. It had the texture of marzipan except I think it was just egg and sugar. It was very rich but I finished all of it anyway. 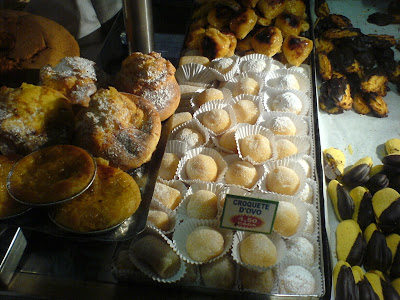 Portugese cuisine is best described as rustic and we really should've known better than to attempt sophisticated Ad Lib which is a trendy “international” restaurant attached to Sofitel Lisbon. It was our last night in Lisbon and we wanted to go somewhere nice. It started off well enough with our foie gras mousse as an amuse bouche. I tasted a hint of orange in the form of alcohol. Nice! My starter wasn’t quite what I was expecting. Turned out to be nothing more than a poor imitation of crispy aromatic duck wrapped in pancake. That was not what the description suggested! My main course was more “impressive”. I had ordered lobster ravioli (below) with grilled lobster tail. That was pretty good but no wow factor. We ended dinner with crème brulee which was done perfectly. Thank God! 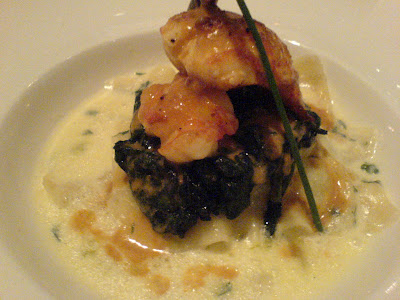 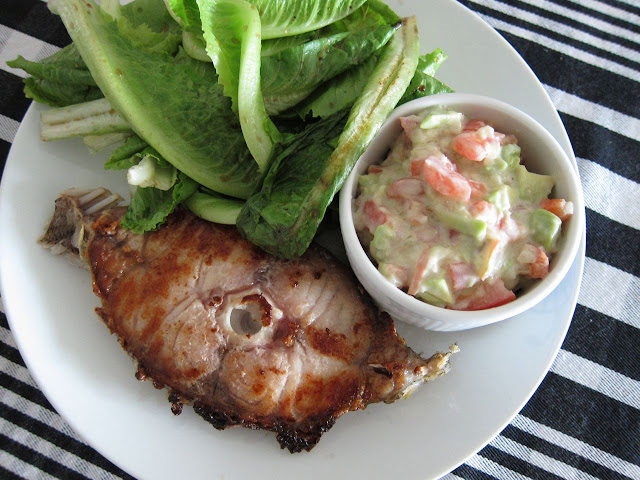 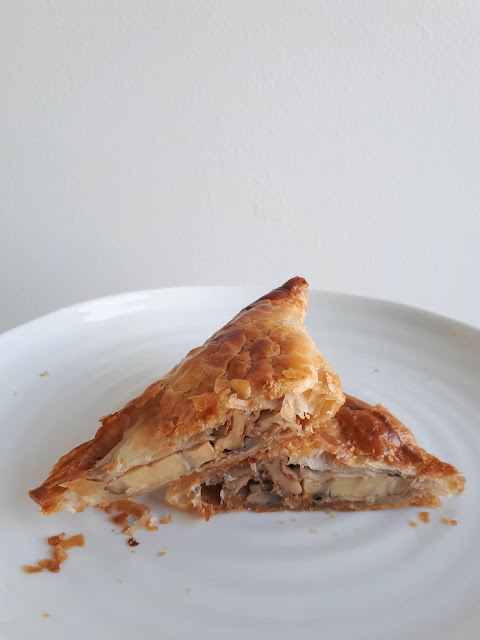