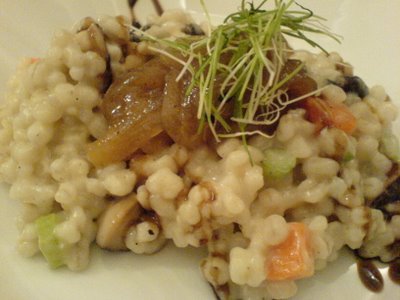 The skies were dark and streaked with flashes of light and claps of thunder. The wedding was about to begin. So it was with much drama that the bride rolled up in her orchid festooned buggy as the rest of us cowered under the marquee. It was certainly dramatic. With each sentence delivered by the minister, the rain came down heavier as if to emphasise the seriousness of matrimony. It was hilarious but it was also so noisy I had to strain my ears to listen. Good thing there was a hard copy on the chair. Everyone got wet and all the ladies got their toes soaked in mud. I also left my shoe behind several times. It was so wet and muddy! Fortunately as the service ended, the rain let up. We moved to the pavilion where dinner and drinks were set up. We were on the Bradshaw, Jones, York & Hobbs table (I'm soooo Ms York!). Homo and his peeps were on the Ewings. Before we sat down to dinner, we all lit our flower floats, made a wish and sent it off in the water. The deck was really slippery, I was concentrating so hard on not falling into the water that I nearly forgot my wish. Sweet Thing came to the rescue, holding my camera and stopping me from doing the splits and ripping my dress in two. All eyes were on ST and Rafs as they main mata with each other. Actually, it could've been just all the alcohol they had consumed and were struggling to keep their eyes focused. So intense! 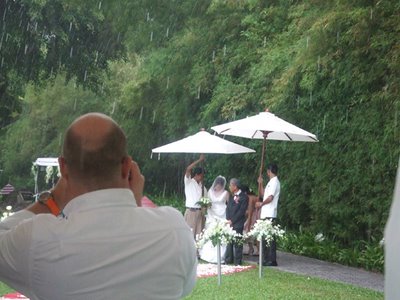 The first two courses on the menu were not very well thought out simply because it guaranteed it was full of anti-pulling ingredients such as raw onion, garlic and cumin! Waaaah! Run away while you can! First course was lobster cerviche which completely ruined the lobster. All I could taste was garlic, garlic and garlic! Pong! Second course was some pretentious thyme-scented beef tea or somefink like dat. It had an overpowering taste of cumin, definitely not thyme! I think I was the only one who noticed though because everybody else was already on their tenth glass of wine while I was still on my first. I really enjoyed my barley risotto with caramelised onions. I did feel a bit like a horse nibbling away at my grains but it was so refreshingly clean tasting compared to the previous two. I finished everything! I'm glad I ordered the rack of lamb for my main course because the cod was sugary sweet! It was rather odd. My lamb was juicy and tender! I wanted to pick it up and gnaw away but felt it would be very un-Charlotte of me to do so. For dessert, there was a lovely coffee ice cream with white chocolate charlotte. The ice cream was nice but the charlotte tasted waxy. The party carried on til about 1ish. Considering it started at 5pm, I would say it was pretty good. As usual, the Malaysians (us lah) were the last to leave! Kuching and Will decided that it was impossible to drink the bar after all. What a lovely wedding. Oh and the cake was divine! One of the better chocolate cakes I have tasted in a while! Light in texture, rich & chocolatey in taste. Really wish I had left more room in my dress for expansion. I could barely sit!