All Aboard, Next Stop - Union Square 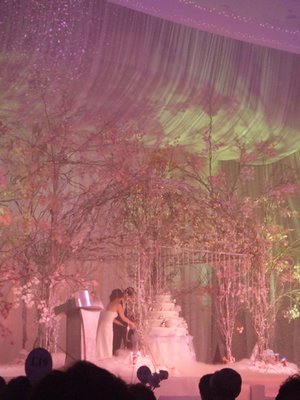 The second wave of weddings is happening to friends in my social circle now. I remember the first frenzy of weddings back in 1999 to 2001. It was literally one after the other. And I’m pretty sure it was the same for other people I didn’t know around my age. Then there were the rest of us who stayed behind, still partying, discovering ourselves, searching for other halves, not really too concerned at then the next boat would be coming to ferry us off to happily-ever-after. I have three weddings to attend between October – January. Quite a few considering most are married by now. As more and more of us get on that boat, the fewer of us there are standing at the dock.

I was at the first of three last Saturday. It was a grand affair at Sunway Lagoon Hotel. Any couple who has done their research will know that it must be a "super size me" grande affair as there are only a few ballrooms in KL that will fit more than 1000. Considering how many tables there were, they did a good job in making it feel cosy. It was a winter-themed wedding and large screens showed slides of snow-capped mountains, snow, snow and more snow. One of the first things I did after we sat down was to look study the menu. I already told Raffleesia that I would kill myself if I saw broccoli and mushrooms in starchy oyster sauce on the menu. I realised that there was a very high chance that I may indeed have to throw myself over that gawdawful lion-sphinx thing. Fortunately I was wrong! We had the 3 seasons (maybe they skipped winter!) to start. Lobster in mayonnaise (You can never go wrong with these two ingredients!), smoked abalone and some deep-fried fu chook rolls. Second course was a double-boiled herbal chicken soup which I had a spoonful off. It was very tasty which gave me reason to suspect that it may have been seasoned with msg. We were then treated to a “special presentation” on the 8 large screens. It was hilarious seeing my old friend in his skinny teenage days. He ain’t so skinny now.

Rafs and I wanted to wander to the other side of the ballroom where some of our other friends were. Where all the smug-marrieds were seated. We were placed on the “random” table. Single, unmarried, divorced dan lain-lain. But we couldn’t leave until we had the butter-fried cod! We know our priorites! I loved the chicken! I don’t know what the hell it was. It was coated with “golden sand”. What the?! I think it must’ve been a mix of paprika, salt & sugar granules. Anyway, it was very tasty. The cod was bad. They overcooked it and made the cod taste tough and leathery. What a waste. So after that disappointing dish, we waded through the hundreds of table, stopping every now and then when accosted by uncles and aunties with the usual “When is your turn?”, “Why you lost weight?” and “Why you put on weight?” All of us “young” people gathered at the foyer where Mr.Viva Yong was getting everyone to gulp down they’re drinks as usual. It was surreal catching up with all those who had caught the first boat. They all have kids, the wives still look great but the husbands are suffering from middle-age spread. After a couple of drinks we went back in to have our salted egg encrusted scallops and yuen yong fried rice. The scallops were divine! Salted egg is the best! Makes everything taste so rich and creamy. Dessert was hundred year happy union (literally translated!) with an added twist - peanut and sesame filled glutinous rice balls in the soup. Nice! They also served us petit fours. The green tea crusted jasmine flavoured chocolate was interesting! The first bite was shockingly bitter as the green tea powder coats your tongue and chokes you. Lethal stuff! But once you get past the shock, it was a very nice piece of chocolate. There were so many left. I hate seeing chocolate go to waste but what could I do? My handbag was far too small to ta pow.
After all the "adults" left, all of us put on our party hats and carried on in a very mild and civilised manner befitting of...well, adults. Sigh, I feel old.
Labels: wedding