Who Ate My Cake?! 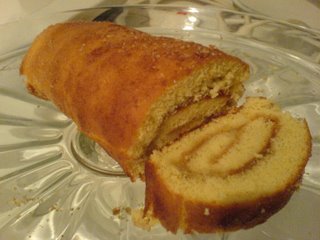 I had a super active week. Not much time for blogging in between work, gym, rock climbing and organising my mum's 60th. Am tempted to make her a cake out of fatty pork with a fried lard crust but settled on getting a butter cake made instead. The rest of the guests may not appreciate pork cake. Speaking of cake, I was suddenly inspired to try out a recipe for low-fat swiss roll with apricot preserve, which I substituted with my leftover apple sauce. In 30 minutes, I whipped up my first swiss roll. It rolled! Ok, it did crack with the first fold but came together after that. It was good! I was surprised by how good it tasted. It tasted like the kai tahn kow with kaya that my grandfather used to eat at teatime. Its strange how the familiarity of the eggy swiss roll displaces the taste of the apple sauce. I had barely cut a slice when Lian came to pick me up for a friend's full moon. She had a bite and thought she was eating kaya roll too. Strange. Anyway, I spent 6 hours on Sunday at Camp 5, yoga-ing and rock climbing. On the drive back, I was really, really looking forward to having my second slice of swiss roll. I was thinking how nice it would taste with a hot cup of milo. Mmmm. Alas! Aghast!! It was ALL gone!! It was a Goldilocks & The Three Bears moment. If I had brown fur, I would be the grizzliest of grizzlys! "WHO ATE MY SWISS ROLL?!!" Turns out it was Sistalocks. The greedy cow ate it all up. All 27cm left of it, all by herself! I don't think she realises just because its low-fat doesn't mean you can eat the whole cake! What a biatch! Sigh... So poor me had to go without. Woe is me! Sniff... (Maya if you are reading this, this is your cue to deliver a basket of cupcakes :-))