Rose, Rose I Love You 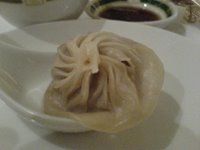 Porkie Homo and I met up last week for dinner after a long absence. Both of us are now home owners and have to cut back on the eating out. After checking out the shops in Starhill and feeling empty-handedly depressed, we sought solace in one of our favourite places, Shanghai. The food does tend to be a little heavy on the msg sometimes but I am willing to make an exception for the 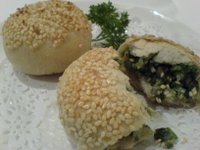 delectable, succulent, little dumplings from heaven - siew loong pow. We also ordered the royal bridge biscuit, braised fatty pork, lettuce in superior soup (Why do they always state the obvious. Why would you want to order inferior soup anyway??) and fried glutinous rice noodles with preserved vegetables. Alot for two people? Just nice actually. We even managed a dessert each. Oink. The dumplings were fab as always. As were the royal bridge biscuits. The braised fatty pork was so-so. I've had better. The vegetables were crisp and the soup had a nice ham flavour to it. I didn't like the fried glutionous rice noodles. Too doughy for me. For dessert 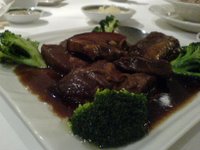 he had the almond bean curd which came in chopped up pieces with fruit on top. What the? I like it set into the mould so I can scoop it out spoon by spoon. Its like eating up mashed up tofu-fah. What would be the point? I had black sesame rice dumplings in ginger soup. That was good! Not too sweet and the dumplings burst easily leaving a trail of sweet black sesame in place. It was pretty expensive and we didn't even have anything alcoholic to drink. This month is going to be expensive I can just tell. Sigh*