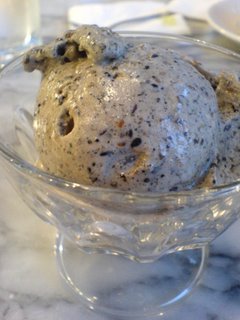 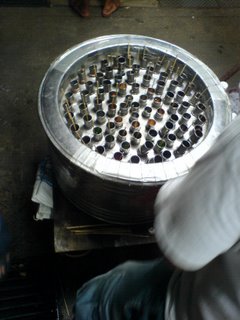 Roti Boy is doing well in Bangkok. We all love our carbs don’t we? I'm so proud of our exports. Also found some funky shoes which were from Malaysia! How come we don't have them here? Anyway, meals were challenging with Sash because she doesn’t eat meat. So I couldn’t try a lot of things. I was overjoyed when we met up with several old friends for dinner at Ana’s Garden. We had a feast! Deliciously moist and tender pork satay, grilled pork ribs, spicy basil chicken, fish cakes and fried fish just to name a few. Everyone barely ate, preferring to drink instead. More for me! It was Pav’s birthday so we stopped by Coffee Bean (not the horrible chain but Thailand’s own) to get an assortment of mini cakes. The green tea cake and white chocolate cheesecake was quite fun in a tacky way. We also had some shochu with oolong tea at Pav's which was surprisingly delicious together and packed quite a punch. 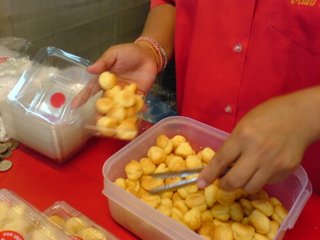 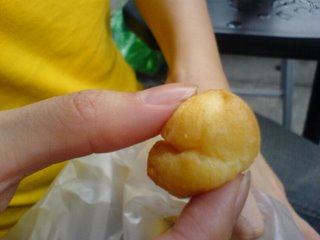 The day before while Sash was getting a hair cut, I went to check out a Thai ice cream chain at J Avenue called IBerry. Had delicious black sesame ice cream which was full of toasted black sesame giving it a nice texture to the smooth gelato-esque consistency. Only 40 baht per scoop. Bargain! I really wanted to have some more but it was quite close to dinner time. Had dinner at cheap and cheerful place Ootoya. I had pork braised in soya milk. Yes, you read right. Soya milk, not miso. It was really yummy! It was more like a combination of stock and soya milk. I liked the subtle bean flavour. 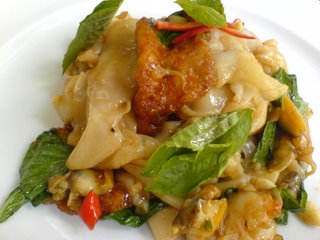 On Sunday I had a good hearty lunch of greasy stir-fried rice noodles with seafood and basil. Damn it was spicy! My ears were on fire! It definitely woke me up for Chatuchak though! You must take the underground to the last stop which is after Chatuchak Park. This brings you right into the market where the nicer clothes and bags are (turn right after you come out) and to the stones (turn left, past the books). Its a longer trip than the overground but less walk! I encountered some bite-size custard puffs which I couldn't resist. Evil little things! Before I knew it, I already finished the whole lot! The picture is deceiving because Sash has exceptionally tiny fingers so infact, the look a lot bigger than they were.

My last dinner was with Gi and Sash at a quaint restaurant around Thong Lor. Didn't quite catch the name. It seats no more than 20 people. We had some mushrooms in white wine and green salad to share. I had pan-grilled duck breast with peach sauce for my main. I like how there was one piece of canned peach! It was actually very tasty. The duck was not gamey at all and the sauce was a mere hint of peach. Just simply home-style cooking. I was pretty shattered from the 5 hours at Chatuchak. I really felt it as we went to the old part of town to meet some industry people. As I sat there watching Sash talk film with her peers and listening to a young artist belting out tunes on his guitar, all I could think about was why I don't come back more often. Its only 2 hours away! I'll be back soon, with fellow meat-eaters so I can try more delicacies. Chomp chomp. 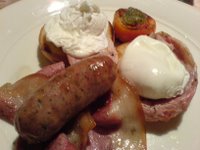 My final meal was with Sash's sister at Conrad. How could I resist a final porkout? Homemade bacon even! Mmmmm. Ya kiteng chan ma gehn pai!