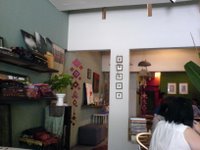 I woke up this morning, had my cheese bun and went to the gym. I especially felt inspired to go after the damn cheese bun from Bread Story. Terrible terrible stuff!! Its so deliciously bad for you! So cheesy, sweet and oily all at the same time. Ugh. Anyway, it was rocket fuel for 5km on the x-trainer. Can you believe I only managed to burn 420 calories according to the machine. I think that was only half a bun. Sigh... Met up with Cuz for lunch. Have been meaning to try Doodee for awhile now. Its a homey cafe located a few doors down from No Black Tie. Good thing we got there early because it filled up very quickly as the office crowd came pouring in. Its a charming little cafe with pale green walls with splashes of Thai silk here and there. A 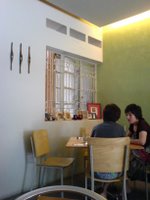 Thai lady came round with a tray displaying bowls of various dishes on offer today. There are no menus. The rice set lets you pick three of the dishes on display and includes a drink. I chose the noodle set after she reassured me there was no ajinomoto in the soup. There may not have been ajinomoto but there was enough fish sauce in there to make soup for a family of 20! I liked cuz's rice set better. Its the same price as chap fahn but you get ambience, air con and a drink. All that for RM6.50. I have a feeling cuz and I will be meeting there for lunch again soon.