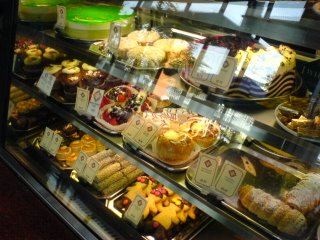 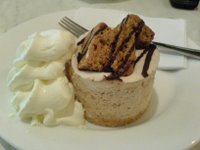 I didn't think it possible to have bad pastry in Australia. After all, most of our produce are imported from Oz. Lem was craving cake and ordered the cookies and cream cheesecake at Dome. The cake was artificial in taste and gelatinous in texture. It was dis-gus-ting! Com'on its cheesecake for fucks sake! Its not rocket science! The coffee was weak and luke warm. I'm just glad to know that Dome is universally shite. I wonder if they have crappy eggs benedict too. On the right is a picture of my eggs benedict the Blue Water Grill. A far cry from the egg mc 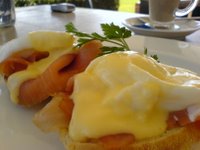 muffin they serve at Dome! Ptooi! Lem also made me eat bad cake at The Merchant. They have several outlets now so I'm guessing they probably get their sweets from a supplier. We had what was supposed to be a vanilla slice. Its a bit sussed when cut into the cake with your fork and the pastry doesn't buckle. The whole thing is supposed fall apart because the custard is supposed to be light and fluffy! (Pictured above centre is the cake display at The Merchant at Harbourtown). I guess the grass ain't greener on the other side after all. The cakes at Bakerzin, Angel Cake House and Secret Recipe are faaaaar better than those that I sampled in Perth this time round. You know, I'm just going to bake my own cakes because even if they don't turn out well, it will be a lot less disappointing.