I have an addictive personality. That is not to say that you can't get enough of me once you get to know me. Although that may be true, I'm really too modest to admit it. What I mean to say is that I tend to get completely blind-sided by my desire to obtain something whether bag, man or food. Its a trait I inherited from my late-father. I remember we would go through weeks, literally weeks, of eating the same darn thing. One time it was peking duck in Tong Shin, another time it was prawns in Cheras, then grilled squid in Pudu and even todhi from Seremban.
So it was no surprise that I was hooked from the first time I tried uppuma at the canteen at work several years back. It was curiousity that made me try this stodgy thing that looked suspiciously like baby food. One bitten, I was smitten! I love the flavour of mustard seeds and onions coming through with each bite. And the buttery aromatic taste of ghee hit me like a hazy spell. It was a bit of a love-hate relationship by the end of it. I loved eating it but hated putting on weight. I had to have it everyday. I would even ask the canteen lady in the morning if she would be making it in the afternoon. She also made fantastic curry puffs but thats another story. After I left work, I actually lost 2kgs just from not eating uppuma and all the other tea time treats. Or maybe I was just heartbroken that I couldn't have uppuma anymore. 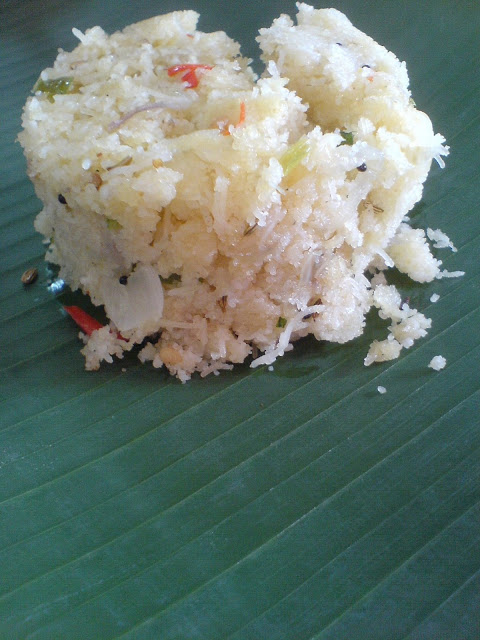 I didn't actively search for it as I visited mamaks less and less over the years. However, recently work has brought me to Bangsar every (freaking) day. And I have since discovered uppuma at Nirvana Maju. Imagine, it was right under my nose all this time! I've had maggi goreng, masala thosai and nasi lemak but it never occured to me to order uppuma. Anyway, it was one of those days when we had to meet in Bangsar for breakfast. For no other explanation except that it was indeed a sign from heaven, I asked for uppuma. Ten minutes later, my long lost love arrived on a banana leaf. It was possibly even nicer than the one at the canteen simply because this one had the added flavour of curry leaves. It added a new dimension to this simple sugee (semolina) dish. Anyway, I've tested the consistency over the past couple of months. It tastes best in the mornings (before 9am) when its fresh and warm. I made the mistake of ordering it once near lunch time. The texture felt like it had been reheated in the mircowave. The dahl is also lovely and thick at Nirvana, as is their coconut chutney. RM3 (RM1 for teh halia) vs RM9 for once cup of Starbucks coffee. No contest really.
Labels: bangsar