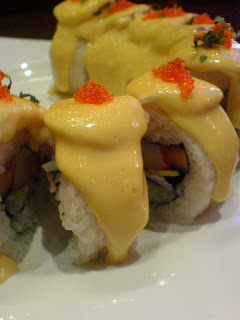 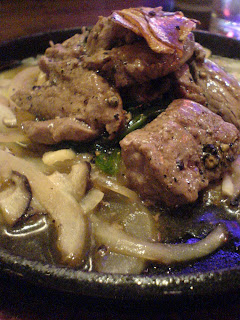 Ok, I have to admit that I am already getting a little bored by the dining choices at Pavilion. Well maybe bored is not the right word. Its more restless than anything. Sometimes I just don't know what I feel like eating because and that is when I want nothing more than a bowl of comfort ala Dontaku. I'm still feeling a llittle sad and sore that Dontaku is no longer. Although I have heard that they have relocated to Midvalley. Thats as good as closed since I only go to Midvalley if I absolutely have to. Last Thursday after some ocha at Ochacha, we spotted two restaurants tucked away in a corner on the 6th Floor. Partly blocked by Big Apples Donuts, all I could see was char chan teng. That was enough to get me excited. Finally something fun and tacky. But while walking there, I was distracted by the restaurant, Dain Ti Hill, next to it which looked like a Japanese restaurant with its faux food display. I saw "pork" and what looked like a katsudon on the menu and the rest is history.
After we sat down I realise that it wasn't quite a Japanese restaurant. While the menu looks Japanese enough, I realise it might be a Taiwanese interpretation of Japanese. I have since seen their advertisement in the newspapers and they describe themselves first and foremost as "fine dining from the Tang Dynasty" and secondly as a modern fusion Chinese restaurant. Hmmm. Are you as confused as I am? I'm not sure which dishes were from the Tang Dynasty and since I did not live in that era nor am I an expert on Chinese cuisine, I will have to assume that it must be the vinegar. They have vinegar in almost everything and they even have it in their beverage list. We were not fans of their cucumber salad which was overpowered by the taste of vinegar. I did not like they way they cooked the spinach either. It had a slimey texture to it. The maki that we ordered sounded too tacky to miss. It was filled with crab stick, pork floss, rockmelon amongst other things and was heavily coated with mayo, mustard and cheese sauce. Crazeee! It tasted okay. There was too much rice and it was missing punch. First of all we couldn't even find the pork floss. I think there may have been just one single strand! Secondly with all the sauce on top, the filling was just secondary. Hot Mouse didn't really like his black pepper and garlic beef. It was quite tasty but the meat was pe
rhaps not very fresh.

But hey, I don't care because I loved my pseudo katsudon! Instead of being coated in batter, this pork cutlet was dipped in a semi-sweet batter that reminded me of pisang goreng. Through the entire meal, the batter remained crisp. Now thats a good babi goreng. I love the added flavour of shiitake and the rice was soaked with gravy and egg. Delicious! Hunky didn't really like it. He felt it was a tad sweet and too junky for him. All the better for me! Lastly, Hunky's chocolate frappe dessert (glorified ice blended chocolate in a martini glass) provided a nice refreshing finish to a thoroughly satisfying meal. 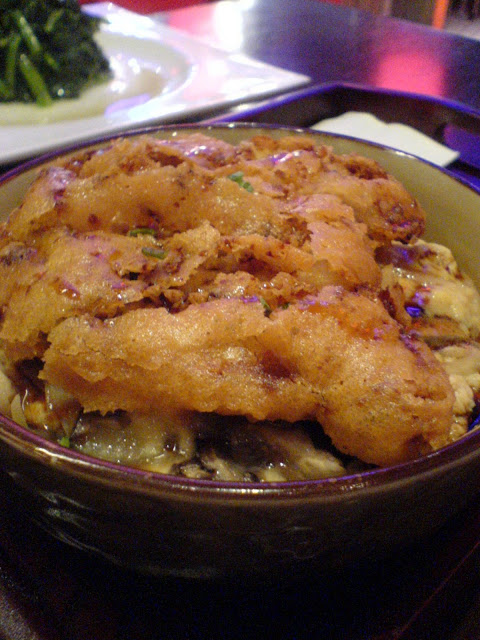 Dain Ti Hill is located on 6th Floor of Pavilion near TGIF. Dinner came up to RM125 incl. one soft drink and an extra portion of pork chop rice.
Labels: Pavilion