There was once a boy named Raju. He lived high up in the Himalayas and spent most of his days herding his flock of mountain goats. One day, while chasing a stray goat, he chanced upon a little hut. There was a wondrous smell floating all round the hut. It was exotic, familiar, sweet and spicy all at once. Raju was enchanted and he hurried into the hut. A little old lady was bent over the stove that was brimming with copper pots filled with exotic ingredients and the aroma made Raju dizzy with pleasure. "Ah, you have finally arrived my dear boy. I have waited for you for a very long time", the old lady chuckled. And that my friends, was how Raju came to acquire all the secrets of the magical kitchen. 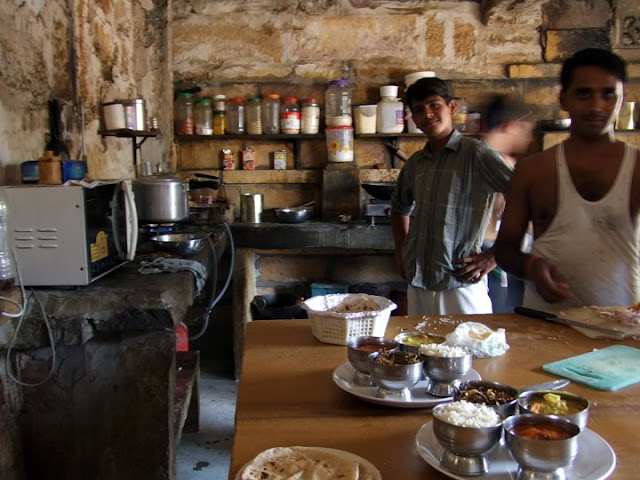 Raju and his magical kitchen (the one in the white singlet)
It was sad to say goodbye to Mr Merchu, Osman and the camels but we were excited to continue our journey. Mahinder got us back to the fort in one piece. What a sweetheart. Ashvind greeted us at the guesthouse and we were ushered to our rooms for a much needed shower. Rafs and I got the "love den". Thats what we figured anyway because there were mirrors everywhere, and I mean everywhere. While we were lazing about in the room, little did we know that our friends already were up at the rooftop restaurant. Rafs and I got there just in time. Not long after we sat down, the thalis arrived. Oh. My. God. Was I dead? Had Balu sat on me last night? Surely this must be heaven. Long grain rice had been fried with ghee and cumin to make deliciously aromatic jeera rice. I could've eaten this alone. Well maybe with some soy sauce and fried egg. The dahl was creamy, chunky and moreish. Deep-fried vegetable pakoras were basted in thick tomato masala sauce and of course, stir-fried ker sangri. We had only tasted ker sangri once before at Ratan Vilas but I can safely say that this had to be what it should taste like. Words cannot do justice to the food that we ate at Desert Boy's rooftop restaurant. It was as if I had arrived home. It was to be the most delicious meal of the entire trip. We made friends with the kitchen crew (Puran, Raju and Sanjay) and they promised to give us a cooking lesson that night.

Jaisalmer, left to right: weaving through the alleys within the fort; a "tourist tailor" - within 24 hours; the view from Chandu's rooftop
Revived from the shower and fantastic meal, we set off to explore the sights around the fort. We didn't get very far. Weaving through the narrow alleys, we couldn't help but stop and enquire about the array of colour goodies on display. Next thing we knew, we were in the shop trying on stacks and stacks of clothing while sipping chai and chatting with the shopkeepers. They are all very friendly and seem genuinely interested in chatting. Time passes slowly in the desert so I guess everyone likes to sit down, drink chai and talk. I don't how many cups of chai we drank that day. I do know that we lost Dween quite early on and the three of us spent the next 4 hours enjoying the "sights" within the shops! Silk blouses for under RM30, cotton bias-cut dresses for RM25, camel leather bedroom slippers for around RM30... Is it any wonder we forgot all about the sights?! After that shopping frenzy, we had a quick drink at Chandu's. Chandu is Kamal's brother. Kamal is a shopkeeper that Ah Boo bought some block-print dies from. From what we gathered, the more successful shopkeepers usually have a relative operating another shop in the vicinity. Chandu sat with us on the roof and talked about his upcoming wedding. He showed us a picture of his fiance. Wot a babe! We congratulated him, told him he was a lucky man and off we went to attend our cooking lesson. Puran was very animated when we arrived because we were late. He even made Dween chop onions on our behalf! Rafs and I quickly sat ourselves in the kitchen and played close attention to the master. There were no measurements or descriptions, we just watched Raju weave his magic. From what I understand, there was pinch of almost every spice under the sun! Pinch of turmeric, chili, masala, coriander... Voila, dinner was served! Jeera rice with spicy lady's fingers, stir-fried gourd and creamy dahl. Of course, piping hot and delicious capati by capati master Sanjay.

Jaisalmer, from left to right: thali from heaven; oh my gourd - I still don't know the name of this vegetable; Raju - he is quite shy, ah bless him!
When Rafs and I woke up the next morning, all we could think about was breakfast! Puran was aghast once again at how late we were. We had said 7:30am but we only arrived an hour later. He is a sweet man who fusses like an uncle would over his nieces. A few minutes later, our platters of puri bhaji arrived. Sweet, sweet puri! I was never fond of puri because they tend to be dripping in oil. This was perfectly crisp and dry (in the unoily sense). And the bhaji! I'm pretty sure I had died and gone to heaven. Oh, Rafs must have died too because she was there oohing and aahing with me over the mind blowing bhaji. I know, I would not have thought that I would ever describe bhaji as "mind blowing" but this clearly bowled me over. Rafs eyed my bowl greedily but all that was left that was half a puri. And only because I had ran out of bhaji. Sigh... It was the loveliest 10 minutes of our entire trip. Raju, oh Raju! We stretched the minutes at the lobby. None of us wanted to leave Jaisalmer. The people of Jaisalmer had us charmed. Finally, with much shuffling of feet, we hoisted our rapidly filling backpacks and went on our way. 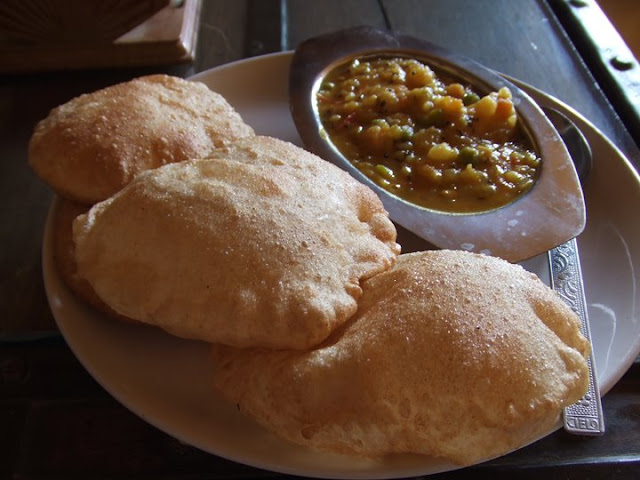 NB: Rafs would like all of you to know that Raju belongs to her and they plan to marry soon.
Labels: holiday India indian