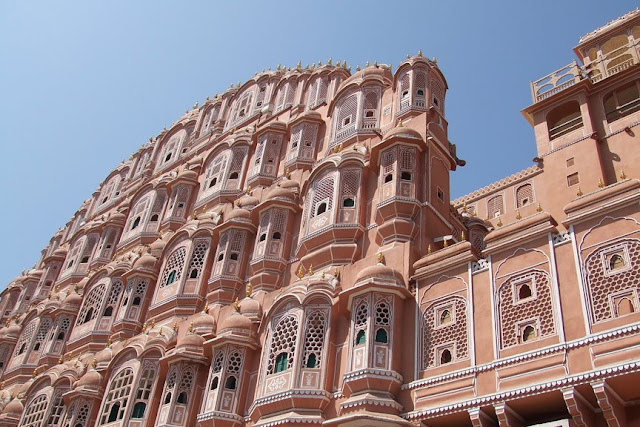 Jaipur: the famed Hawa Mahal
After a nights rest in Jodhpur at a beautiful albeit slightly neglected guesthouse called Dewi Bhavan, we continued our journey East to the pink city, otherwise known as Jaipur. I may not have heard much about Jaisalmer and Jodhpur before the trip but everyone knows about Jaipur. The romantic city tinted with pink, where one can buy the most beautiful gems and of course the gorgeous Hawa Mahal. Hawa Mahal is translated to Palace Of Winds (not of the gastrointestinal sort) and stands in the middle of old city looking down at one of many bazaars in Jaipur. Its a little tough writing about this place. To be honest, I was very underwhelmed. I've seen really amazing photographs and standing in front of it was a bit of a anti climax actually. When I got home to look at the photos, it looked amazing! I guess its just one very photogenic building. Don't get me wrong, it was very beautiful but it just wasn't what I expected at all. My favourite monument here was City Palace mainly for a beautiful courtyard that had doors representing the four seasons. They were intricate without being gaudy and the colours look as vivid as the bright saris of Rajasthani women.

Jaipur, from left to right: the beautiful and intricate doorways at Ridhi Sidhi Pol in City Palace. Four doors for four seasons. Ganesh against the gorgeous green shades representing Spring. I'm pretty sure the peacock represented Monsoon season but then I was too busy snapping shots to really pay attention to the audio guide.
Jantar Mantar was a blazing hot day and I regret not hiring the services of a guide. I couldn't really appreciate these gargantuas instruments of astronomy as I literally could not figure out the heads nor tails of these phenomenal structures. Superficially, they were also quite ugly as they've been painted over from their original sandstone colour. Nasty. The following day we made it to the Amber Fort. It was massive and again, mystifiying by the sheer scale. There are actually three forts but we only made it to the "newest" wing. We were a little tired by this time. I liked the crazy mirror inlays that created a glittery hall. There is a railing around the walls and you can't enter the main chamber anymore because people kept nicking mirrors off the wall. By this time all I really wanted to do was go shopping and drink chai. When we got back into the old town, we wandered around looking for gems and also the famous sweet shop called LMB. LMB stands for Lakshmi Mishthan Bhandar and it is quite an institution. Not only can you get a huge array of sweets to appease the most insatiable of sweet tooths, its also a hotel! Its an amazing double shot lot. The moment you walk in you are hit with the unmistakable scent of oil and sugar. Not the most unpleasant of smells. I'm not an expert on Indian sweets so I just picked a whole assortment of them. They were all so sweet, creamy and rich. These must be the only sweets that I can't eat a lot of.

Jaipur, from left to right: colourful canned goods and dried herbs and vegetables; bright disco-looking sweet shop; delicious treats from LMB - in my haste to buy all the goodies, I forgot to snap a picture of the shop!
Our hotel is a converted old manor called Diggi Palace. And palatial would be a good way to describe this old mansion with its sprawling lawns. It reeks of faded glamour and old money. The rooms are a little tired but I feel it just adds to the charm. In the mornings there are even pea hens strutting about. We spent two nights here and ate the best naans ever! They were always crisp and fresh. Whats the English translation for "soong" (loose) and "song how" (joyful mouth)? Well, that would be the best way to describe the delicious naans. The thalis were delicious too of course. The Diggi family lives in the adjoining building and we even got to see "Lord Diggi". We assumed him to be the lord of the manor as he has a distinguished air around him. Plus, people constantly flocked towards him. Diggi Jr was a friendly chap who came and came to join us for drinks one night. He shared with us two wonderful bits of information. One, where to buy the best cottons for a pittance. Two, a monument located nearby which turned out to be the highlight of my Jaipur experience.

Jaipur, from left to right: block printing is famous in Rajasthan; the slightly surreal Jantar Mantar; glittery mirrored hall at Amber Fort
Chand Baori is a 10th century stepped well located in the village of Abhaneri about 95kms from Jaipur and located off the road to Agra. It served as the local watering hole for the villagers as well as the Kings public swimming pool on hot acrid days. There are many stepped wells around and although they are not unique to Rajahstan, this one is quite spectacular. Imagine an inverted pyramid with multiple steps forming "V"s all way down. All 20 metres of it. I felt a little dizzy when I was standing at the edge. The sheer scale of it was amazing. As we sat in the shaded stone pavilion, I couldn't help but think "If I fell down, I would hit every step on the way and die a horrible death". Yes, it was just that and nothing deep and meaningful really. 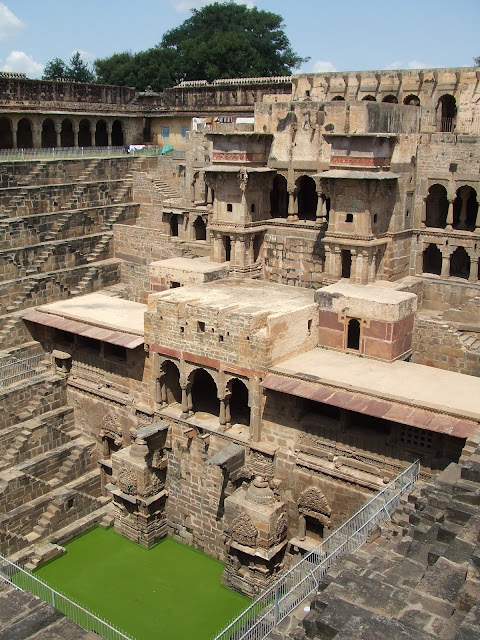 p.s/ I forgot to mention that we stopped in Pushkar after we left Jodhpur. Not only were we conned into some faux spiritual blessing by the lake in a temple, we were also forced to "donate" X amount of money in "Euro, USD or Sterling" preferably. These people who called themselves Brahmins should be ashamed of themselves. We were just walking along and a stranger comes up and gives us flowers. Please do not accept them and walk away, quickly! We stupidly followed them to a temple by the lake and we were split up to do individual blessings because "your destiny is not mixed with others". Halfway through, they start asking how much I wanted to donate. After I told him Rp1000 he insisted that it wasn't enough and demanded for at least USD100. And after all that, at the end of it, they asked for more money to feed their families. Disgusting! If you are thinking about visiting Pushkar, don't waste your time. Its nothing but a hippy town thats full of tourists looking for an alternative Goa.
Labels: holiday India