Eating Out At Home 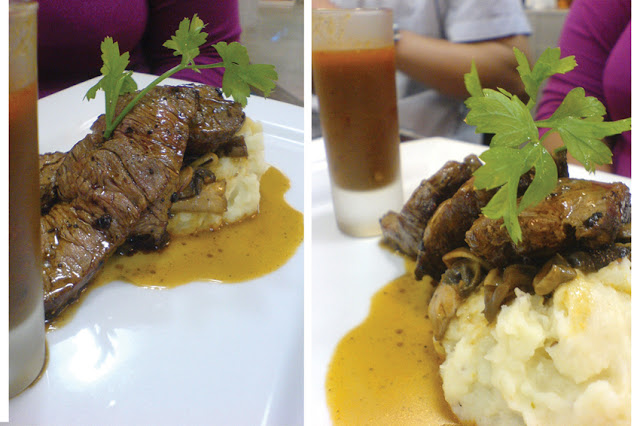 Its August already? I can't believe 2007 has just flown by that quickly. Malaysia is turning 50 in a few weeks. I will be turning %& shortly after. And in a few months, which will seem like two weeks, my new flat will be ready. I'm excited about finally moving into my own place but also a little anxious about leaving the family home. Meanwhile, I am busy looking at furniture, lighting, wallpaper, crockery and white goods. Speaking of which, I was at Great Eastern Mall a couple of weeks back. I met up with some ex-colleagues over lunch. Funnily enough, all of us have bought a place since we left. It was for this very reason we all left around the same time. It happened over one fateful lunch 4 years ago, while visiting a property showroom that it dawned on us that we would never be able to afford a place with the mere pittance we called salary. We left, moved onto better things and are proud home owners. But I digress, back to GE Mall. We met up for lunch at, aptly called, At Home. It is a huge shop selling everything from pens and chandeliers to plastic flowers and whisks. They even have a little cafe that has a mixture of local fare and Italian-inspired dishes. 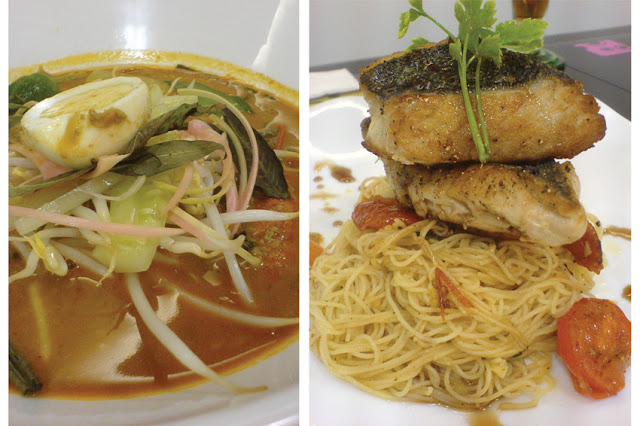 Its an odd place to be having lunch as you feel like you are part of the display. Still, the prices seemed very reasonable and it was a welcomed change from Alexis. Crispy ordered pan-fried garoupa fillets with angel hair pasta (RM23++). I don't know why but I can't seem to understand fish with pasta. It tastes perfectly fine but something doesn't seem right to me. His fish was slightly overcooked but tasty nonetheless. Hunky ordered curry laksa (RM11++) which is listed as one of their specials. The bowl was impressively huge but the dish itself was disappointing. The gravy was watery and tasted more like asam laksa than it did curry laksa. Or perhaps that was intentional as it was listed as their signature dish after all.
The winning dish of the day was Fren's grilled tenderloin with mash and mushroom "rog out" (RM30++). I'm sure they meant ragout. Unless its some Ampang speak for some type of food ronggeng? The slices of beef were tender and well seasoned. Actually, it didn't even need the ragout. The mash was fluffy and reminded me of my mum's mash potatoes. Being the cynic, I had ordered the least offensive thing on the menu which was angel hair pasta with sundried tomatoes and prawns (RM18++). Let me explain why I was cynical. First of all, the faintly fluorescent lighting was not encouraging. Secondly, the layout of the place suggested the food was an afterthought. Thirdly, I was put off by the "Best Of Elevator Music" combined with the ambient chirping of imaginary birds in the background. Anyway, my pasta was actually very pleasant. It was a sizable portion of al dente pasta tossed lightly with olive oil, garlic and sundried tomatoes. The prawns were a little overcooked but at least they were fresh. 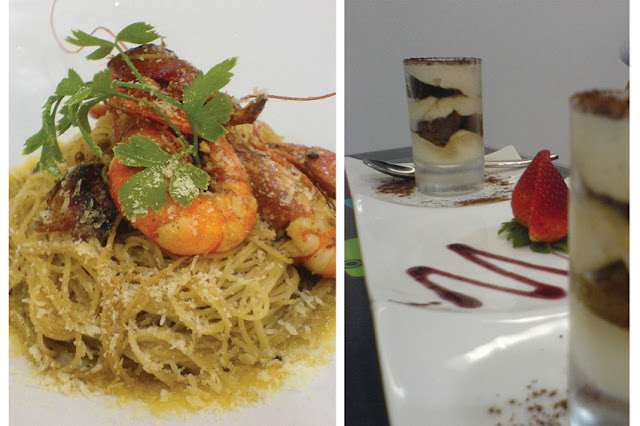 Crispy was still struggling with his rather huge and thick mango lassi when it came to dessert. Hmm, that sounded rather rude. Anyway, Hunky ordered his favourite, tiramisu (RM11++). It arrived as a pair of shot glass filled with cream and coffee-soaked sponge. I actually quite liked this eventhough its not quite tiramisu without the liquer and mascarpone. Actually, there was a hint of cheese. Very faint and was quickly overpowered by the taste of coffee. I liked it because it was small and light. Overall, it was a very pleasant and relatively cheap lunch. Now, if only they would change the lighting and music...

At Home is located on the first floor of Great Eastern Mall. Total bill including coffee and two iced lemon teas RM143.