The First Meeting of JFWA

This post has been long overdue. Between work, yoga, climbing and the new craze- Facebook, I've been immersed in tales of overlapping universe and souls which appear as physical shapes in the form of an animal. I am talking about Philip Pullman and His Dark Materials. I am almost done with the third and final book. With just chapters away, I don't want it to end so I am taking a breather and blogging instead.
Its not everyday I get invited to dinner with the tai ka chehs of food blogging - Boolicious & Lyrical Lemongrass. And when they invited me to join the Japanese Food Kawan Association, I was deeply honoured and even volunteered to be Treasurer as well as being delegated the arduous task of being Head Of Maki subcommittee. So it was that fateful Thursday evening, I began my initiation at Hajime. First and only topic of discussion of utmost importance - to order sashimi, or not to order sashimi? It was difficult and we skirted around the issue by ordering everything else but. 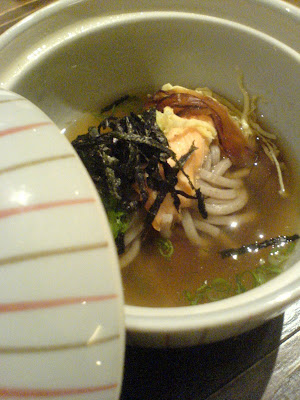 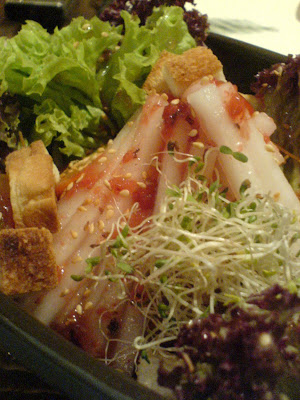 First up was the salmon shichu mushi (above left) which arrived in a little porcelain cup. It was a delicate dish of salmon poached in broth with soba noodles and seaweed. I liked the clean and subtle taste of dish with just a hint of that beautiful flavour salmon has. It was followed very quickly by fugu mirin hoshi. When we first ordered this dish, we were debating as to what kind of fugu we would be getting at RM14. Perhaps it was fugu-infused, fugu-scented or drizzled with fugu oil? In actual fact, it was frozen fugu fillets that have been sliced, dried and roasted to the point where they tasted like chee yoke kon. It was accompanied by a dipping sauce of mayonaise. The three of us agreed while it was not something we'd order for dinner, we would all be glad to have a tub of it when watching tv. Next to arrive was daikon ume salad (above right) which sounded a lot more interesting on paper. It was a rather plain salad of crisp radish and mixed greens dressed with a sour plum dressing. This was perhaps the most disappointing dish of that evening. And to put my skills to the test, we ordered one of Hajime's makis which was the black spider maki. It sounds sexy but the "black" part of the dish was merely a smattering of caviar. However, the rice had quite a good texture, the crab was crispy and overall it was good. Not the best I've had but good. 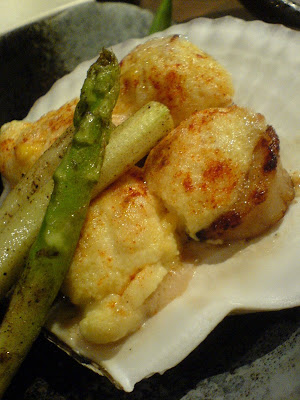 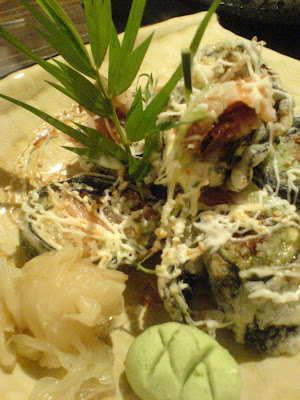 The best dish of the evening - hotatei corn yaki (above left). Scallops baked with a corn flavoured creamy cheese sauce. It may sound a little tacky but it was reaaaally good! The scallops were cooked to perfection with a slight spring to the bite and the sauce was just dreamy! Boolicious and LL were kind enough to let me have the last one. I grabbed it before they had a chance to change their minds. We also had the second maki of the evening called taco belt. It was a rice-less fried maki filled with soft shell crab, salmon and avocado. It had a wonderful array of textures that was deeply satisfying as your taste buds explore the different layers in each bite. The wagyu roll with shimeji mushroom was a little disappointing as there was nothing about the beef that suggested it was wagyu. It was neither flavourful nor mouthwateringly tender. The piece I had was filled with shimeki mushroom which added a very nice flavour to the beef. Boolicious' piece, unfortunately, was all beef and didn't taste of very much at all. 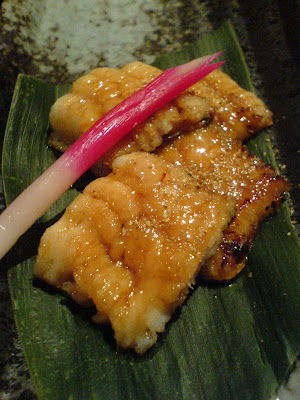 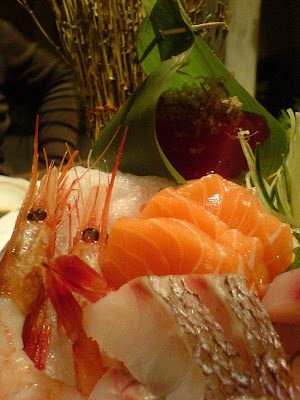 The hamo (pike eel) teriyaki (above left) is meant to be different from the usual unagi variety we get here. Perhaps it takes a real connoiseur to be able to distinguish them. Since I not, I really couldn't tell. If anything, it was just paler in colour and looked as if it may at least have been fresh once! Unlike the uniformed frozen caramel-coloured unagis. Eventhough we were probably quite full at this point, we felt that the evening would not be complete without resolving the sashimi issue. So it was with my arm-twisting that President LL ordered a sashimi platter. We sampled the "cheaper" platter of the two that were available. The presentation was quite lovely with a separate green leaf cove for the tuna. The sashimi was very fresh and we were thoroughly satisfied by this inspection of Hajime on Jalan Damai. To finish off the evening, we shared kuzukiri (below) for dessert. It was an odd dessert of jelly-like noodles sprinkled with chestnut powder, gold leaf and gula melaka. It was very pretty and unusual in taste. I liked that it was not very sweet and the chilled noodles was a perfect way to neutralise all the savoury food we just had. The chestnut powder had us stumped for awhile. I would definitely come back here again as the pricing is reasonable, service is good, food is yummy and plenty of parking! 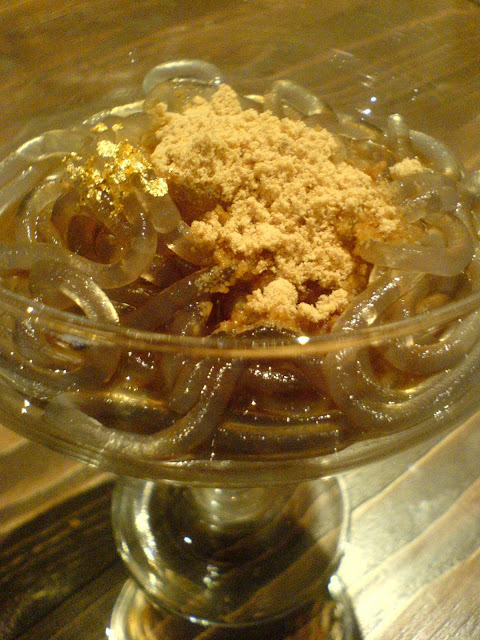