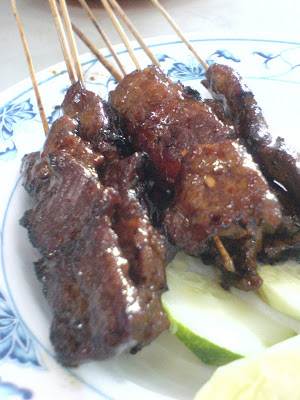 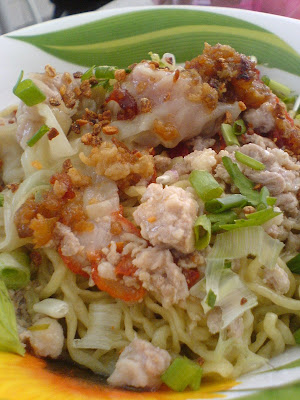 Two Saturdays ago, we arrived bright eyed and bushy tailed in the land of laksa, kolo mee & cats. It has been almost 9 years since my last visit. I remember it to be an alcohol fuelled holiday as drinking seems to be what Kuching people like doing most. I figured this time round, it would be a little less crazy as we are all 9 years older. This obviously wasn’t the case although it wasn’t so much about getting completely wasted. Time just passes really quickly here. The next thing I knew, it was 3am and we were leaving Ipanema (Sam’s lovely laid back bar that has Kilkenny’s on tap!). Every night was a late night so I did not eat as much as I expected to. Sabby's mum made sure she bought us breakfast every morning. When I say breakfast, it was more like early lunch which was when we woke up. Every morning there would be packets of Sarawak laksa waiting for us. Pictured below, from left to right: We tasted a spicy and mellow version which was a favourite of Sabby's Mum's Pastor (Yes, I don't have the exact names because Sabby is obviously still too hungover to give me details of the food). The second one was a sharper version of the first which is from a shop near where a relative lives. And the final one which also happened to be Sabby’s family favourite – an intense and flavourful one from Foodie Goodie. Below: Spot the difference!

When we did get a chance to eat at the stalls, we tried pork satay in Chinatown at the coffee shop which also houses a Chinese theatre. It was very different to the one from Ipoh old town. This was peppery, spicy, caramelised and highly addictive. This place was also where I first fell in love with kolo mee. Somehow this time, it didn't quite have the same effect. I found it bland and oily. Never a good combination! The keow, which is basically wanton, was very tasty and meaty. I like it with vinegar and chilli oil which I didn't get to taste this time. Still, there is something very comforting about biting into gorgeous little meat and prawn dumplings. I have never been a fan of fishballs. Not since I was six? I like my fish ball to be reminiscent of fish not some springy ball that my dog would love fetching. The fishballs here were not too bad. They were springy but they had the texture of real fish. 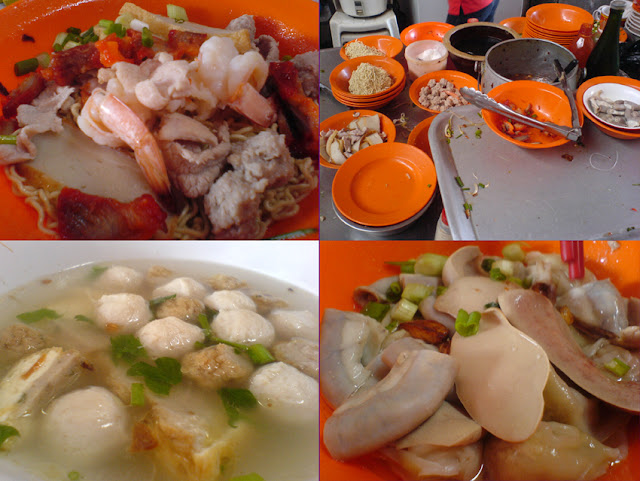 The day before we left, we had tea "Kuching-style". According to our sleep-deprived host, this meant belacan mee hoon and tomato mee. The belacan bee hoon w 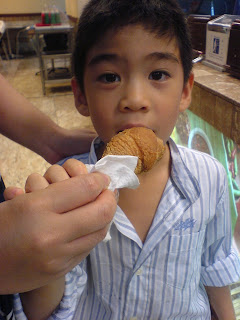 as an acquired taste. I like belacan, I like har koh too but this was bordering on nausea for me. It was wet, prawny, fishy and pongy. No, I much prefered the tomato mee which was seriously tacky. It was crunchy, sweet and slightly tangy. Kind of like eating Mamee with sweet and sour sauce. Surprisingly good! My favourite meal of all was probably hakka mee on Carpenter Street on our last day. This place was Sam's favourite and he explained that the way they serve it at this shop is different to all the other places in Kuching. They also make the noodles themselves on a daily basis. Its certainly different to what I am used to. For one, this had keow and char siu in it. The noodles had a lovely and springy texture which really made the dish for me. I wish I could've had another bowl!
Last but not least, my darling Sugar Bun. I remember Sabby going on and on about this magical piece of chicken that would put KFC to shame. One bite and I was hooked. This time round, I had the honour of converting another doubter, Rafflesia. Thats her opening her mouth below. Look at how crispy that skin is. And you bite into tender, well-seasoned and juicy chicken. She almost wept tears of joy. It looks like we're force feeding her sprout but really he is enjoying it. This was after a big meal of tomato mee for him. Mmmm sugar bun.... 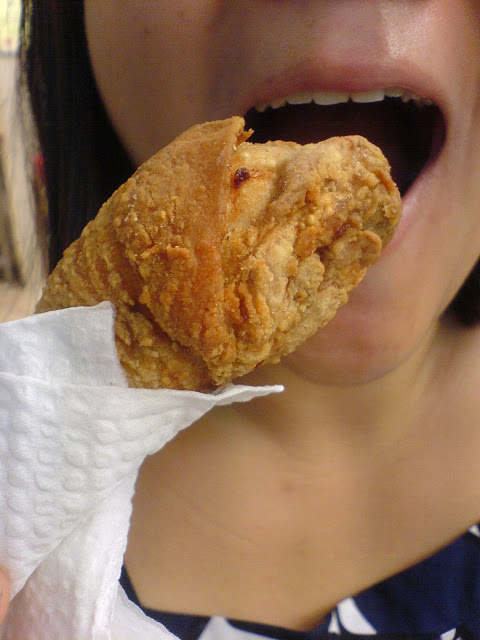