clockwise from top left: do people really get their ears cleaned at barbers?; tom yum meehoon with prawns; Lamb having his babycino; roast duck noodles; giant cockels! Run for your life! 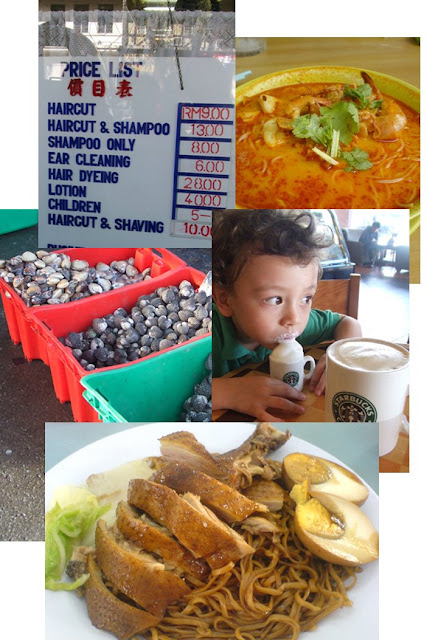 Sometime last year...
Sis: Hey you want to come to KK with Lamb and I?
Me: *gasp* No thanks
Sis: Comelaaah. Com'on, you should spend some quality time with your nephew. Now that you have moved out, he is quite lonely you know...
Me: Er...
Sis: I'll pay for your trip
Me: Okay!
Sometime last month...
Sis: Our flight is at 9:50am ya
Me: Huh?
Sis: Our flight to KK lah
Me: (still blank)
Sis: Don't tell me you forgot
Me: No, no of course not... Remind me again?
That was how I ended up on a mini vacation to KK with my sister, nephew and Pal. I've never been to KK. And if I had remembered I would've planned a trip up Mount Kinabalu. It was a little too late so I guess I'll just have to visit again. I like KK. It reminds me of Ipoh but with better weather and surroundings. It has the old charm of a small town. Even more idyllic when placed next to the sea. Pal's friend Judy was kind enough to pick us up from the airport and ferry us to lunch at a kopi tiam famous for its tom yum noodles, fish head mee hoon and deep fried tofu. Restoran Janggut is located at Hilltop and is only opened for lunch. It was extremely busy when we got there and took quite awhile for our food to arrive. The noodles were tasty enough but surprisingly mild. We also ordered a side dish of deep-fried goodies which was fantastic for soaking up the soup. Pal ordered her favourite pickled chicken feet. They look like a plate of aliens when it arrived. Blanched and tossed in a sweet and sour dressing with raw onions, its a little too gelee for me.
On the whole, based on the places we went to, I found that the food in KK was light on the palate. I think most of my friends would find it slightly on the bland side. I loved it! I loved that there was no msg anywhere! Two dinners at Chinese restaurants and on both occasions, I didn't feel parched in the slightest. Wonderful! On the down side, I truly absolutely detest corn starched sauces. Bad chinese food has ruined hot and sour soup and chicken sweetcorn soup for me forever! I now avoid anything that even looks like it has traces of corn flour in it. So it was to my horror to see almost every dish at the Chinese restaurants we went to drowning in gloopy, glossy, thick sauce. Ugh. On our first night, Judy took us to dinner at Restoran New Lu Yang. It seems like a neighbourhood tai chow with an emphasis on seafood. They don't serve pork here. Infact, a large number of places don't serve pork. I gather its because there is such a large population of Indonesian workers here. Most of the wait staff were Indonesians. Anyway, one of the better dishes at Lu Yang was the black pepper venison but I wouldn't make it a point to go there specifically for that dish. The second night was a little better. We went to a restaurant called Garden Seafood which is located on the road that leads to KKIA. Infact, its only about 5 minutes from the airport. Every now and then we would hear the roar of a plane's engine much to my nephew's delight. We had a very nice fried fish with sour mango salad and spicy calamansi dressing. The fish was very fresh (we saw it being scooped out of the tank) which always helps. We ordered crabs with cream sauce. Again, it was more like cream starch. Shudder. I can't remember much about the rest of the dishes. Obviously they failed to leave an impression. Perhaps we just ordered the wrong dishes.
We spent two nights at The Jesselton. It claims to be a boutique hotel. It definitely belongs to a bygone era. The rooms are clean and the shower works but you can tell the hotel has seen better days. However the location is fantastic as there are plenty of places to eat and its walking distance to the jetty. We caught a speed boat to Sapi Island. Apparently the least crowded among the 5. Oh, there are quite a few counters at the jetty. Go to the ones in the middle as they are more popular and therefore have more frequent trips back and forth the islands. Anyway, Sapi island still looked pretty darn packed to me despite it being low tourist season. The shallow part of the sea was crowded by Chinese tourists snorkeling. At around 3pm the crowd dissipated and it was lovely and serene. The island was also full of monitor lizards. BIG monitor lizards. They were kind of creepy and cute at the same time. Hmm, I know a few quys that fit the same description. Anyway, there was little Hongkie boy telling his dad that he had seen komodo dragons. And his dad is telling him not to tell lies. Few minutes later, "WAAAH chun hai yau koh-moh-doh dra-guns ah". The island shuts down at 4pm so we only got to enjoy one hour of serenity. If you come with a tour, there is an option of including a meal. We saw all the tourists enjoying a big buffet. We were one of the few locals who ate at the cafe on the island. Its more like a mamak stall really. It might have been the heat and hunger but I swear the fried mee hoon and fried rice was surprisingly good! 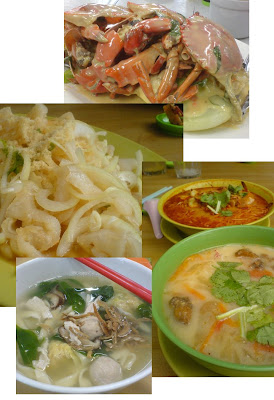 Clockwise from top: starchy cream sauce eeew; fish head noodles; pan mee with sui kow and beef ball (???); pickled chicken feet
Lamb was surprisingly awake but still hungry when we got back. So Sis and Pal went to a bakery nearby and bought tonnes of buns back. Old fashioned chan pow filled with all kinds of filling. Red bean, coconut, pineapple, peanut and custard, we tried them all! Thats one thing we noticed about KK. They like 'em bakeries. Every fourth shop sold some carbs of some kind. No wonder I was 2kg heavier when I got back. On our last day, we had pan mee for breakfast at one of the many coffee shops around our hotel. The pan mee was strange. I've never had sui kow and beef ball in my pan mee before! And no chilli! How odd. We were not completely satisfied so when we walked past another cafe and saw roast duck noodles, we quickly ordered a plate to share. The noodles were springy and lightly seasoned. The duck was pretty tasty and tender. Before we left for the airport, we had lunch at Sugar Bun Cafe. I love Sugar Bun in Kuching but the one in KK wasn't as good. Think they were missing the key ingredient - MSG! Anyway, KK is a fun place to visit even if you don't dive. Mind you, its not as cheap as we expected. The prices are more or less the same as KL if not more. For example, our pan mee breakfast cost RM5 per bowl and the tom yum mee hoon with prawns on the first day was RM10 per bowl.
Marathon update: I've been back on the treadmill since being sick, etc. I'm doing 1 minute spurts for now. Its all my knees can handle for now. I'm happy to say that my stamina has already improved after 3 sessions. I tell you, there is an inner Florence Griffith Joyner in me dying to get out. If only I could shed the marshmallow padding on the outside. Sigh...
Labels: holiday