A Taste of El Bulli via Lafite 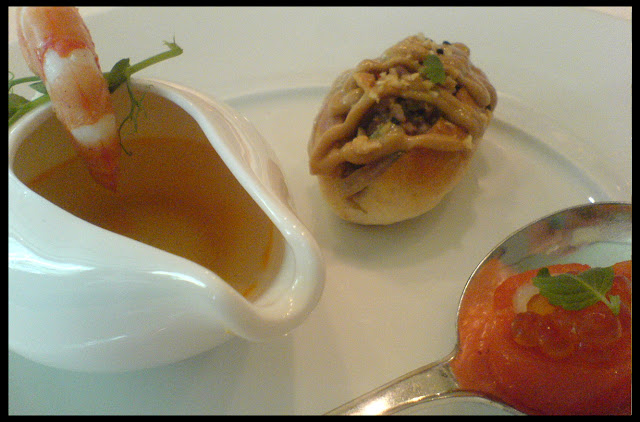 I really liked Ratatouille the movie. Food is always an evocative subject matter for me. To see the colours and details on big screen was inspiring and heart warming to say the least. I especially love the jaded food critic Anton Ego. I can relate to this funny man. In the movie, Anton imparts some wise words, "In many ways, the work of a critic is easy. We risk very little yet enjoy a position over those who offer up their work and their selves to our judgment. We thrive on negative criticism, which is fun to write and to read. But the bitter truth we critics must face is that, in the grand scheme of things, the average piece of junk is more meaningful than our criticism designating it so. But there are times when a critic truly risks something, and that is in the discovery and defense of the new". Which brings me to my question, has anyone been to El Bulli? I want to taste the new version of the old and vice versa. I want my taste buds to wake up once more.

I know a couple who were lucky, or patient, enough to secure a reservation albeit 2 years in advance. They said it was exciting for the first few courses but the novelty soon wore off as the courses became a regurgitation of the same basic principles. Unfortunately I won't know for myself as I am a subscriber to instant gratification so I won't be putting my name down. Besides, it seems a little extravagant to fly somewhere for a meal. Fortunately for us mere mortals, we can now try a slice of El Bulli via Kevin Cherkas in Lafite, Shangri-la Hotel. 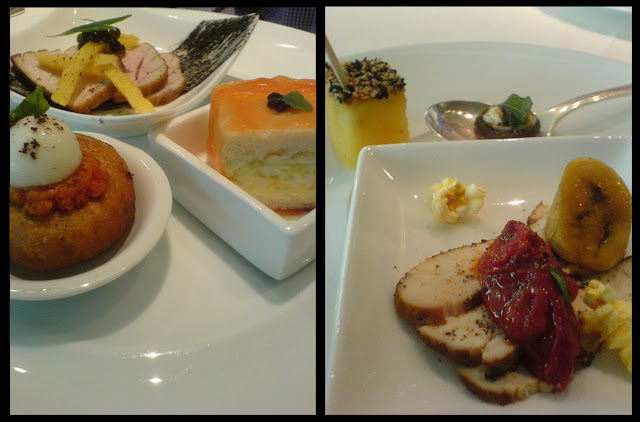 I can't say I was expecting much as it would be hard to anticipate the unusual. Actually I lie, of course there were expectations. For one thing, it is Lafite. Malaysia's first fine dining restaurant. And two, this chef has trained under the genius Adrian Ferria himself. So yes, I expect to be wowed. So while I am excited by Kevin Cherkas, I am also acutely aware that I have little faith in hotel restaurants. Upon walking in, we were greeted by what can only be described as a perspex carousel mounted with a lot of fancy danfangle accompanying a plethora of canapes. Talk about mouthful. We were seated and asked to pick our main course. We decided that one of us should try Kevin's signature dish which was a miso cod. It sounded so 90's to me but I thought it maybe a different interpretation based on his knowledge from El Bulli. I made Hunky order it while I ordered the shepherd's pie with wagyu beef, onion caramel and mash. 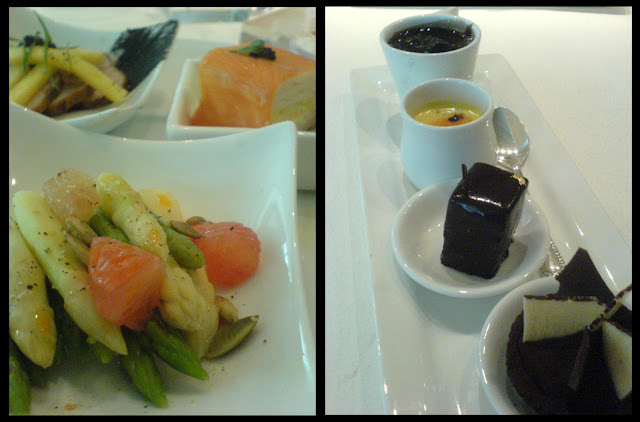 The carousel was colourful and held so much promise as I studied each little canapé of a starter. There were shotglasses of pink and tangerine froth which turned out to be just guava and orange juice with froth on top. Was it meant to clean your palate? And not even freshly squeezed. Leftovers from the buffet breakfast? There was sliced roast chicken with tomato compote and banana. I’m sorry to say, chicken will always taste like chicken, banana or not. Seared tuna slices with pineapple. Dry and forgettable. Sesame-crusted watermelon teriyaki which I nearly overlooked because I thought it was some sort of classy bengka ubi. Fresh and delicious. Apricot compote with cheese mousse. Rich and intense. Buns filled with what tasted like minced chicken with a thick peanut butter sauce. Was he channeling Nigella? Asparagus salad with mayo and grapefruit. Crisp and clean. A truffle flavoured egg sandwiched carefully wrapped with thin slices of salmon. Cleverly presented and tasty, good trick to stop the bread from drying out. Poached prawn with an extremely tangy broth. Mouth-puckeringly good. A mussel and prawn skewer served with a separate dropper filled with sweet chilli sauce. Less show, more bang please. It was a good assortment of canapés but I didn’t come to eat ordinary canapés. Has Kevin’s artistic license been revoked by the management? Or is it just my jaded taste buds speaking? 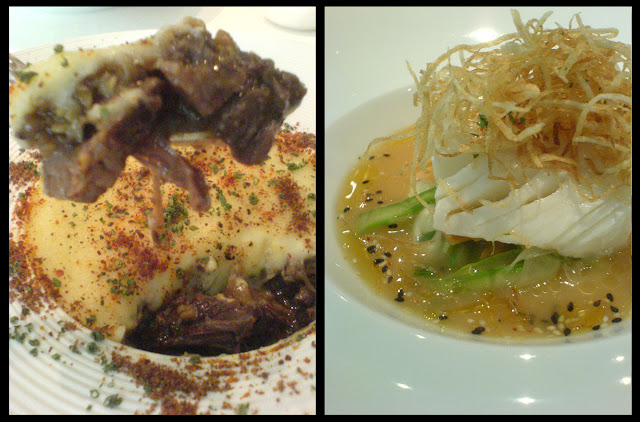 Our main course arrived swiftly. It is stated very clearly in the menu that the maximum wait for the main course is 10 minutes. My shepherd's pie was beautiful. It was simple, rustic and the meat was absolutely breathtaking. I only managed half of it as it was so rich. Hunky’s cod on the other hand left me less than impressed. It was slightly overcooked and bland. Shocking really. The simple steamed one upstairs at Shang Palace would’ve been miles better.

I am convinced dessert was not prepared by Kevin 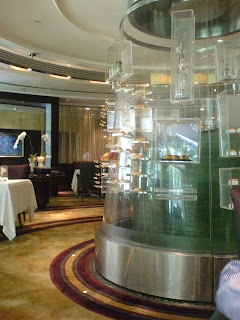 because there was something about it that screamed "Buffet!". We didn’t get a choice of dessert which was unfortunate because it was far too heavy after that main course. There was a dark chocolate souffle which was neither light nor airy. A "warm" creme brulee which the wait staff tried to bullshit me about. A super velvety chocolate mousse. And my favourite of the plate, a dense chocolate tart with whole hazelnuts. Dessert did not sit well with the wagyu. Overall, I would give the food a 7/10. I have no doubt Kevin can cook, if only the management would just him do his thang. So my first foray to the world of molecular gastronomy was a tad disappointing. It wasn't what I was expecting which was a new representation of the old and familiar.

What was truly unacceptable was the level of service. The wait staff we had did not have a clue about the dishes. The explanations should’ve been so well rehearsed that he would've anticipated my questions. Besides, I wasn’t asking anything unreasonable. I simply enquired about the lamb loin main course. I wanted to how the corn was prepared. If He said “Two types of preparation. Er…Ah…Its like ah…I also don’t know how to explain it to you”. If you are going to be clever and place "cornX2" on the menu, the least you could do is to brief your staff properly. And another waiter told me that the creme brulee was mango pudding. Really, need I say more? At RM68++, I'd rather pay a little more and head on over to Cilantro's for their super popular lunch (available only on Fridays, wait list approx. 2 weeks). Maybe Air Asia will be flying to Europe in two years, maybe I should make a reservation.