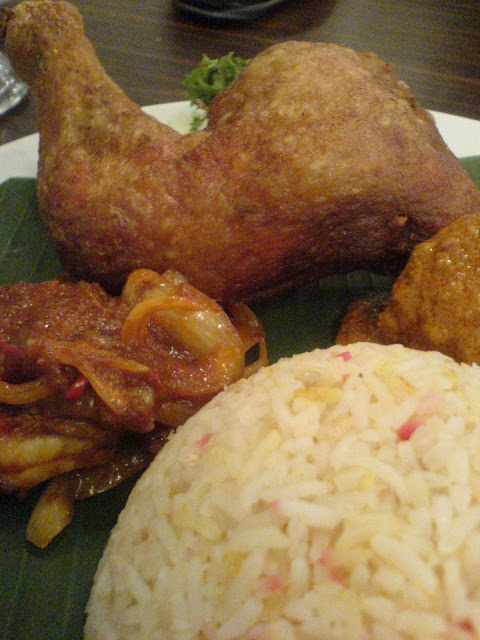 I know I keep saying this but honestly! Time really does fly! Has it really been over two weeks since my last post? I've just been busy catching up with friends who were visiting. One of them, Deng, is moving to NY with her hubby. So over the past couple of weeks, we've been trying to cram as much eating time possible as she doesn't know when she will be back next. Deng is a huge fan of all things chicken. Fried chicken, KFC, chicken rice, salted chicken and more. One of her all-time favourite haunt is Madam Kwan's for their nasi bojari. I've been to MK twice in a week. Thats more than I've ever been in the past year. Come to think of it, the last time was when she last visited! I don't have anything against MK. Its convenient, relatively cheap and fast. But with so many other new and better restaurants, it has fallen off my restaurant radar. The nasi bojari is still very good. The chicken is always perfectly seasoned and crispy. The beef rendang is so tender that it just falls apart like candy floss. The prawn sambal is still the weakest of the three, tasting more like water than prawn. I just remembered why I stopped going. There was one time when we were being bitten to death by mosquitos. When we asked the staff to do something about it, they plonked a can of Shelltox on the table and walked away. What the?! 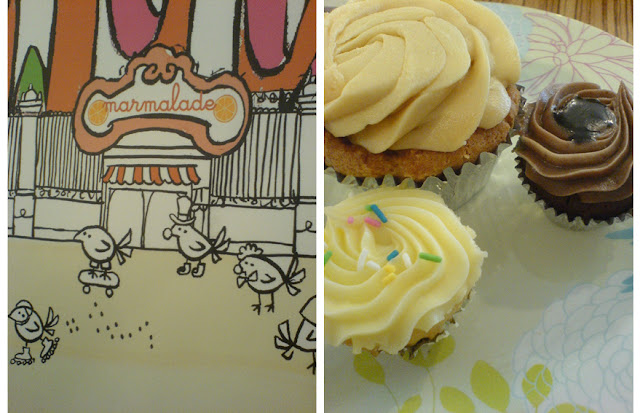 I also met up with Hot Mouse at Marmalade. He felt like cupcake being the big girl that he is. I keep forgetting about this cafe. Its a charming little place for mums with kids. Which probably explains why I never think about going to this cafe. I love the mural especially the chick on roller blades. I can imagine kids must love it even more. We both ordered watermelon juice with mint and lime. And we shared one large peanut butter cupcake and two small ones. We both love the soft and fluffy texture of the small cupcakes. I could've easily popped 10 into my mouth. The peanut butter failed to impressed. The texture was a tad dry and coarse. For the sake of research (yea right), we ordered one more cupcake. It was a lemon cupcake with lemon frosting. The texture was soft and fluffy but the taste of lemon was too subtle for me. The bill came up to under RM30 which was surprising. The drinks must've been about RM10++ each which meant that the cupcakes came up to less than RM7. Gasp! Is that possible?! What is more shocking that I find myself thinking how cheap that is.
Labels: bangsar cakes