The strangest thing happened between 10pm Sunday and 6pm Monday. I had the full blown flu-like symptoms and then it was gone! Poof! Just like that. I guess it must've been allergies or something. Anyway, while stewing in self-pity I tried to figure out what to cook for dinner to make myself feel better. I didn't want to make porridge because my porridge is terrible! Its either rice floating in water or starchy paste you can use to put up wallpaper with. Soup? No, I wanted something heartier so I decided on a beef and barley stew. I know, there are at least 3 people I know who will run away screaming at the sound of barley followed by stew. Somehow that sounded very lovely and healthy in my head. And what could be easier right? I love chucking everything in a dish and just leaving it on the stove. I couldn't find any brisket so I bought shin instead. Dang, I needed to sharpen my knives! The damn thing was so muscular and tough! I thought to myself, "Shit, not going to be able to eat this thing for at least four hours!" Two and a half hours later, voila! It was tender and bouncy like a baby's bottom. Patting myself on the back here but it really was quite good and just what I needed. The barley was a nice change to the usual spuds. Plus, it made me feel all nice and healthy eating it! Two days later, it tasted even better. Stew and curries are the same, they definitely taste better the following day. 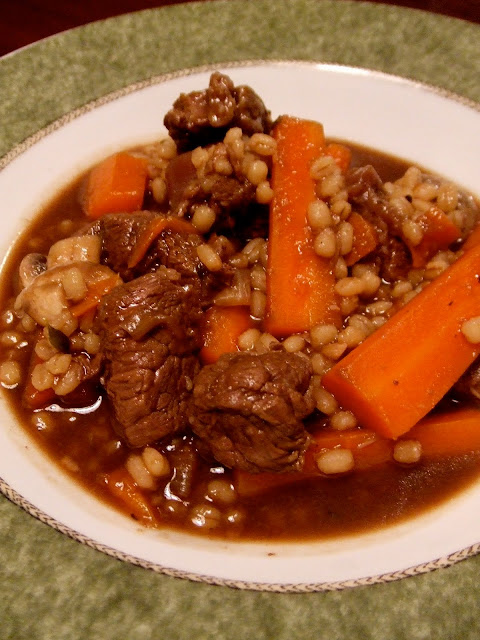 If you want to be brave and try the recipe, here it is. Portioned for 2-3 people.
300g beef shin, biggish cubes
2 carrots, peeled and sliced into sizeable chunks
1/2 cup barley, rinsed
1 cup button mushroom, halved
1 can stout
1 onion, halved and quartered
3 cloves garlic
sprig thyme & 1 bay leaf
salt and pepper to taste
Heat oil in a casserole dish and stir-fry onions and garlic on medium heat until fragrant. Add beef and make sure its not sticking to the bottom of the dish. Pour in stout, herbs and 150ml water. Cover and bring to a boil. Then lower the heat to a simmer for 1 hour.
Then add in carrots followed by barley 15 minutes later. I like my barley with some texture left. The barley will soak up most of the liquids leaving you a lovely rich stout gravy. Mmmm! About 10-15 minutes before the dish is done, throw in the mushrooms. Season liberally. I found this stew needed quite a bit of salt. And depending on your brand of stout, there may be a slight bittersweet after taste of stout left. I think next time I might add some tinned tomatoes to it to balance the bittersweet taste. Anyway, happy cooking!